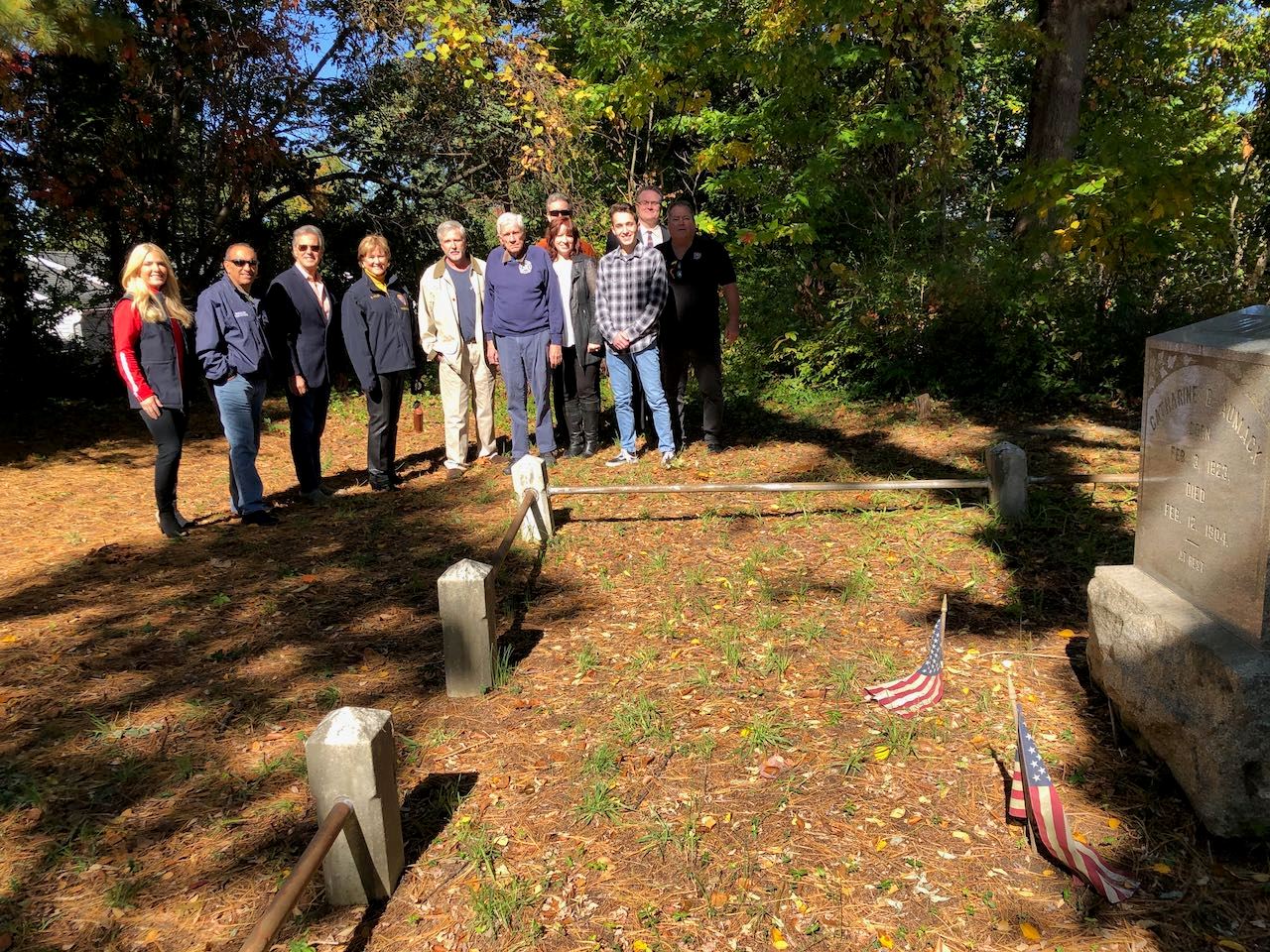 Long ago, the Raritan Ridge Estates subdivision in Hazlet was owned by one of our area’s earliest families, the Aumacks. Their family farmhouse was located off Union Ave., surrounded by crop fields tended by the Aumack and later, the Walling families. Lynn Boulevard was a one-lane dirt road called Aumack Lane.

Harry M. Aumack, 83, is the former mayor of Keyport. When he was a boy, he would visit his family’s burial ground on a hill with his grandfather, also known as Harry M. Aumack. “he knew most of them and how they were related," he said.

The 90 x 100 foot cemetery became surrounded by newly built homes on Virginia and Oregon Avenues in the 1950s. Though the easement is still visible on maps today, the Aumack family said they lost access to their cemetery over the years, and it became overgrown with brush. Many of the white marble tombstones became damaged and markers were lost.

Last summer an Eagle Scout James Borg was looking to plant flags on soldiers’ graves. He learned that there were American war veterans buried in the overgrown Aumack Family Burying Ground, some with who had served in the Revolutionary War, the War of 1812 and Civil War era. His inquiry reached Hazlet Township Committeeman Skip McKay, a former Navy SEAL who grew up nearby. As soon as he learned about the situation, McKay set out to restore ownership and dignity to burial ground. “I was especially outraged to know there was a young 18 year-old there who was sent home to die from the Battle of Antietam with mortal wounds, underneath the broken tombstones.” McKay was referring to Thomas Bailey Aumack, 1844-1862, who served as a private in Company C, 87th Regiment of New York Volunteers..

McKay went to see County Clerk Christine Hanlon, Monmouth County’s “keeper of the records,” for expert help. “We have a tremendous amount of cemetery information. But sometimes it’s hard to put the pieces together,” Hanlon said.  Jane Colyer, supervisor of the county mortgage and deed and map room, was able to produce the key document: a deed in 1852 from William Aumack to his brother, John Aumack, citing the cemetery lot was reserved “for the use of the Aumack family as a burying ground forever.” The burial ground is also cited on the deeds held by the adjoining property owners.

This was welcome news for Harry Aumack and his six grown children, who have been eager to gain access visit and clean up their ancestors’ resting place.

On Saturday, Oct. 17, Harry Aumack and his son John welcomed Hanlon to the partially cleared site between 15 and 17 Virginia where just one granite cemetery stone was visible, that of Catherine Bailey Aumack, 1823-1904, who Harry Aumack said was the mother of Keyport’s first fire chief.  Joining them were county Freeholder Director Tom Arnone, Deputy Director Sue Kiley and Freeholder Ross Licitra, as well as Hazlet Mayor Mike Glackin and Deputy Mayor Tara Clark.  Hazlet VFW Post 4303 was represented by Terrence Flynn. John Aumack, who is a general contractor in Hazlet, said he has plot records that will help them identify the approximate two dozen graves at the site, thanks to a distant family member's survey in 1933.

He expressed his gratitude for the help he received from local government officials. “ Christine (Hanlon) and Skip (McKay) have been tremendous,” he said. “We are so grateful to them for caring.”

Hazlet Township was originally incorporated as Raritan Township by an act of the state legislature on February 25, 1848, from portions of Middletown Township. It was renamed Hazlet Township as of November 28, 1967, based on the results of a referendum, and in recognition of Dr. John Hazlett.

A popular resource for fans of Hazlet History is the Facebook group: I Grew Up In Hazlet, NJ! Join the discussion and share photos and memories.

Hazlet will celebrate its 175th anniversary in 2023. If you are interested in exploring Hazlet history, please contact the public information office. We welcome your interest!

Celebrating the 100th Anniversary of the 19th Amendment, which Guaranteed Women the Right to Vote

August 26, 2020 marks the 100th anniversary of the ratification of the 19th Amendment to the U.S. Constitution, which guaranteed women the right to vote. In this video, Monmouth County Clerk Christine Giordano Hanlon narrates an illustrated history of the women's suffrage movement and its ties to Monmouth County. Featured in it are trailblazers from Keyport, Shrewsbury and Red Bank.

Also in August, Hanlon broke ground on a commemorative garden with a sitting area dedicated to the brave suffragists. It is located outside the County Election Offices in Freehold.

The fight for women’s suffrage spanned over seven decades and it involved tens of thousands of courageous women,” said Clerk Hanlon. “As the Clerk of Elections for the County of Monmouth, I am proud to have launched this commemorative project to allow the thousands of voters who visit the County Election Offices to witness, learn, and be inspired about the historic significance of this date.