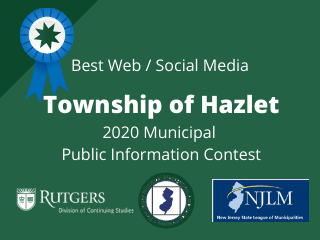 Hazlet Township is the winner of Best Web / Social Media  in the statewide 2020 Municipal Public Information Contest organized by the Center for Government Services at Rutgers Division of Continuing Studies and run jointly with the New Jersey Municipal Management Association and New Jersey League of Municipalities.  The purpose of the contest is to promote the use of successful and innovative techniques that increase government’s ability to meet citizen needs and improve access to government services.

Show Off Your City

A photo that perfectly framed a unique moment in Hazlet during the summer of COVID-19 has been selected by the judges for Honorable Mention in the New Jersey State League of Municipalities 2021 "Show Off Your City" contest.

The photo, taken by Hazlet resident Danielle Paul-Brosonski, will be published in the April edition of the magazine. (See a PDF)

The summery scene shows the Hazlet Rocks garden display, which sprang up at the base of a beloved shady tree in Veterans Park during the long days of lockdown. It began as a creative community project led by Hazlet resident and prolific rock painter Rich Pyburn, with the encouragement of the Township Committee.

It drew visitors to the township park to "see the garden grow." They could check out the uniquely painted rocks and add their own versions to the pile. A community of more than 1,300 people shared photos and compliments on the Hazlet Rocks Facebook Page .  It became something "to do together, but apart" when social distancing was necessary. It inspired feelings of positivity, accomplishment and connection for many. 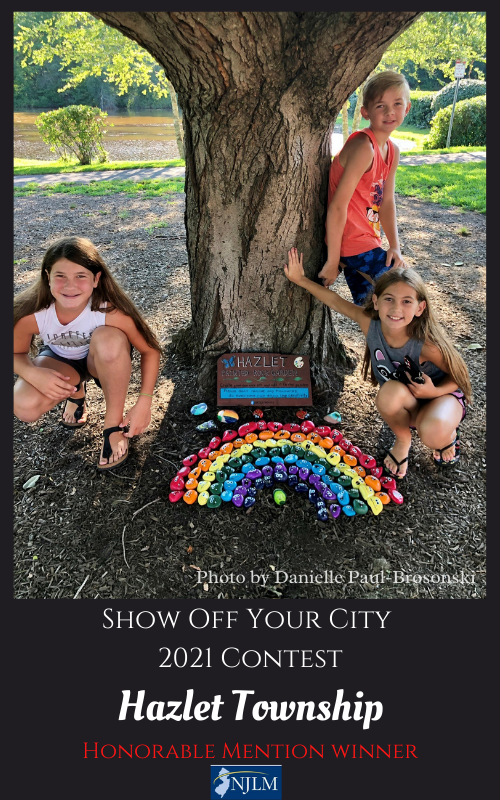 The Hazlet Rocks garden was removed in the winter for safekeeping. But Rich Pyburn is bringing it back to the park this weekend in a different location, near the main playground.

"It’s always a challenge to select from the beautiful assortment of entries to the contest, and we felt your image was one that really successfully captured a moment," said the NJLM Magazine's managing editor Amy Spezio in her letter of congratulations to Hazlet.

This is the first time Hazlet Township has entered the annual contest run by the New Jersey State League of Municipalities, a voluntary association, which represents all 565 municipalities in the state. We plan to do it again, to show off our unique town. Entries will be collected by the Public Information Office at the end of the year. Look for an announcement to contribute yours!