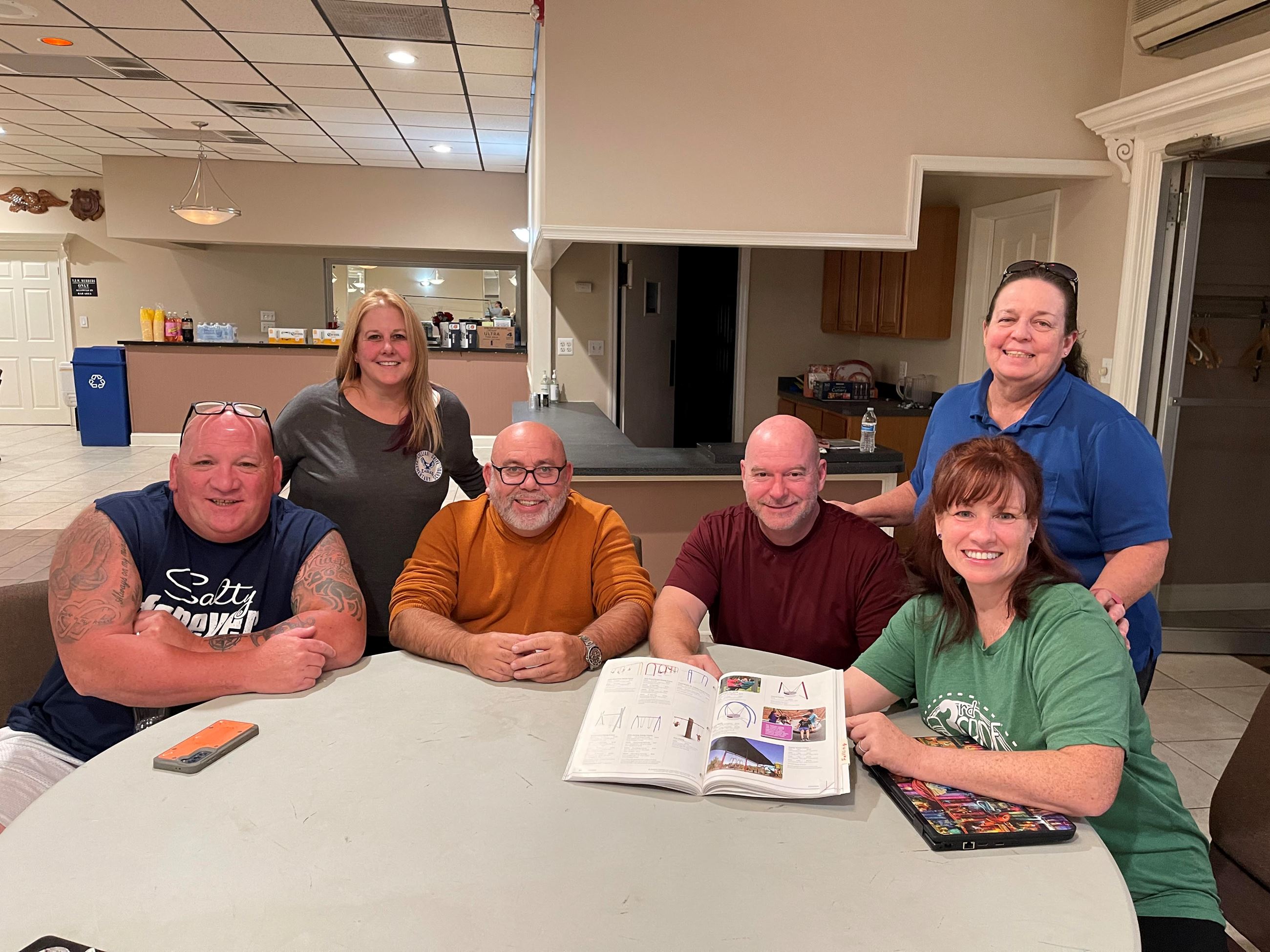 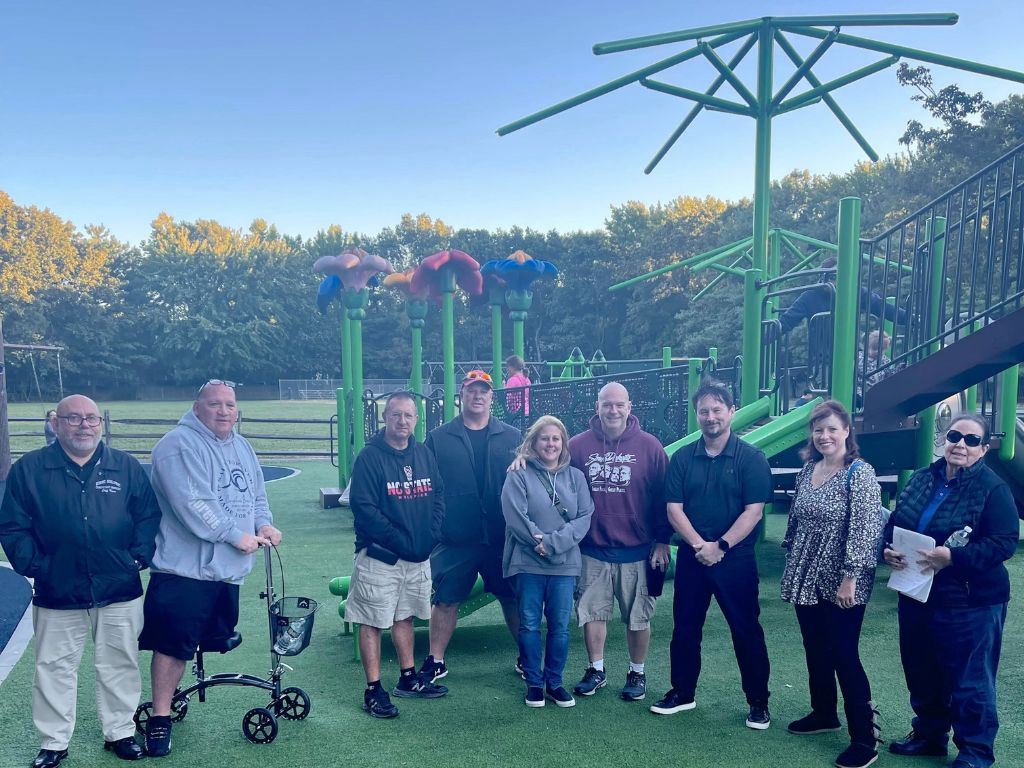 The team is assessing the best playground surfaces to install. They plan to maximize steel construction to ensure long-term durability and to make the playground resistant to vandalism. The Core team also discussed multi-purpose court designs, and other features including community-friendly lighting, multi-generational benches, and possibly incorporating senior citizen elements.

Creating a Dream Playground & Park in Hazlet
The Hazlet Township Committee's exciting plan to transform the 8th Street Park into a valued community park for the entire town continues to move forward. 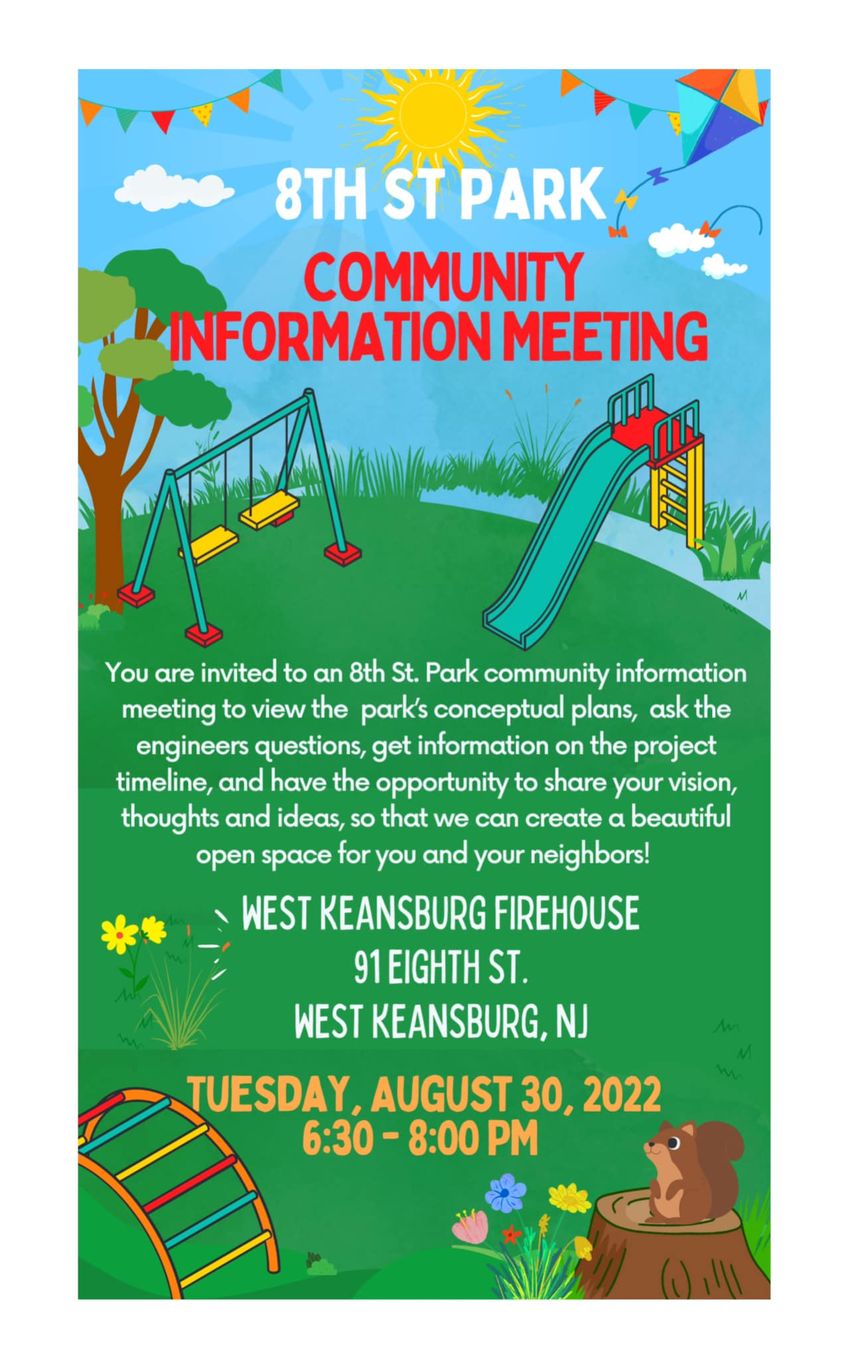 All are invited to a Community Information Meeting hosted at the West Keansburg Firehouse, 91 Eighth St. Learn about the concept plan, talk to engineers, offer input and view the park site on Tuesday, August 30 from 6:30 p.m. to 8 p.m.

Tara Clark, the township's former mayor, continues to spearhead this project. On August 10 she sought the advice of playground experts at Hazlet Summer Recreation Camp. Clark read kids inspiring true story about a girl who helped design a playground in her community, then gave the children the challenge of helping design the future play space for 8th Street Park.

The children shared what they love most about playgrounds they have visited and gave invaluable feedback on structures like saucer swings, wavy slides, spinners, and rope towers. They were excited to hear that their suggestions would be shared with community members, town engineers, and Hazlet's governing body and they could create a dream playground of their own.

The Hazlet Township Committee voted July 12 to approve a $1.5 million bond ordinance to provide financing for the  improvement of 8th Street Park, allowing the project to move into the design phase.

The governing body also authorized $141,560 to spent on an engineering design. Mayor Michael Sachs invited former Mayor Tara Clark to organize neighborhood input for the design for the township engineer.

"It's one of the most exciting things that have happened in town for decades, and I think the people of the town will be so appreciative, not just the people of West Keansburg," said Clark, after thanking the Committee for passing the bond.

The Hazlet Township Committee agreed at its June 21, 2022 meeting to introduce a $1.5 million bond ordinance for improvements to Eighth Street Park and authorize the issuance of $1 million in bonds or notes for the financing part of the appropriation.

The amount includes the sum of $250,000 expected to be received as a Monmouth County Open Space Grant and $250,000 as the down payment required by NJ Local Bond Law to be provided by the Open Space fund.

To finance the cost of the Improvements not covered by application of the Down Payment, negotiable bonds of the Township would be authorized to be issued in the principal amount of $1 million.

A public hearing is scheduled for the Township Committee's 8 pm meeting of July 12, 2022 at Hazlet Town Hall.

The Township Committee is another step closer towards its goal to completely renovate 8th Street Park in West Keansburg. 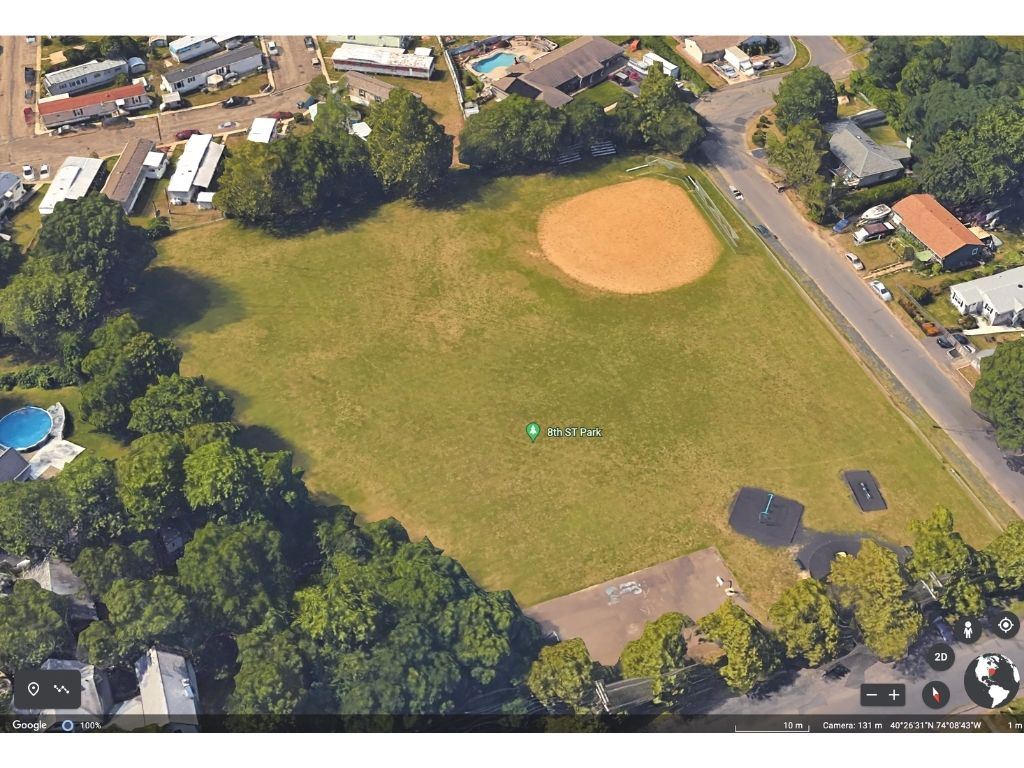 At Tuesday’s Township Committee meeting, Mayor Michael Sachs announced the township was informed it would soon be receiving a 20-year low interest NJDEP Green Acres Program loan of $600,000, following action by the state Legislature and Governor.

“We are moving forward with this project," Sachs said. "We have just been notified within the last 48 hours that the Green Acres funding is now available for us to apply for. So, we’re in the process now of doing the paperwork and then it will go out to bid.”

Also, in recent weeks, the township received the agreement paperwork from the Monmouth County Municipal Open Space Program. In December, Hazlet Township won a competitive $250,000 matching grant from the county. The Township's matching portion will come from the Hazlet Township Open Space Trust Fund, thereby providing a total of $500,000 towards the renovation of North Hazlet Community Park, also known as the 8th Street Park.

Mayor Sachs explained the project would not be done in pieces or scaled back.

Both programs require the completion of a survey report known as a Preliminary Assessment and Site Inspection (PASI). Earlier this month, the Township Committee received the required T&M Engineering report, which will be submitted with the funding agreements.

On August 7, 2021, members of the Township Committee, Recreation Department and Public Information Office set up a tent at a neighborhood block party on Central Avenue. The purpose was to gather feedback for the concept plan for the nearby 8th Street Park. Residents looked at the map, talked about their wants and needs, and offered comments on accessibility and links to the popular Henry Hudson Trail transportation trail.

On May 15, 2021, Mayor Tara Clark called up on neighborhood residents to talk about improving 8th Street Park. They had a candid discussion about what they liked about the park and what they did not. The group gave their thoughts on what amenities they would like to have, and gave feedback on lighting, security and noise.
Attending the listening session was Deputy Mayor Mike Glackin, liaison to the Recreation Advisory Committee; Recreation Director Chris McManus; Township Engineer Project Manager Dennis Dayback; Open Space Advisory Council Vice Chairwoman Annie Eng and Chairman Joe Pobega; and Christina Johnson, Public Information Office. 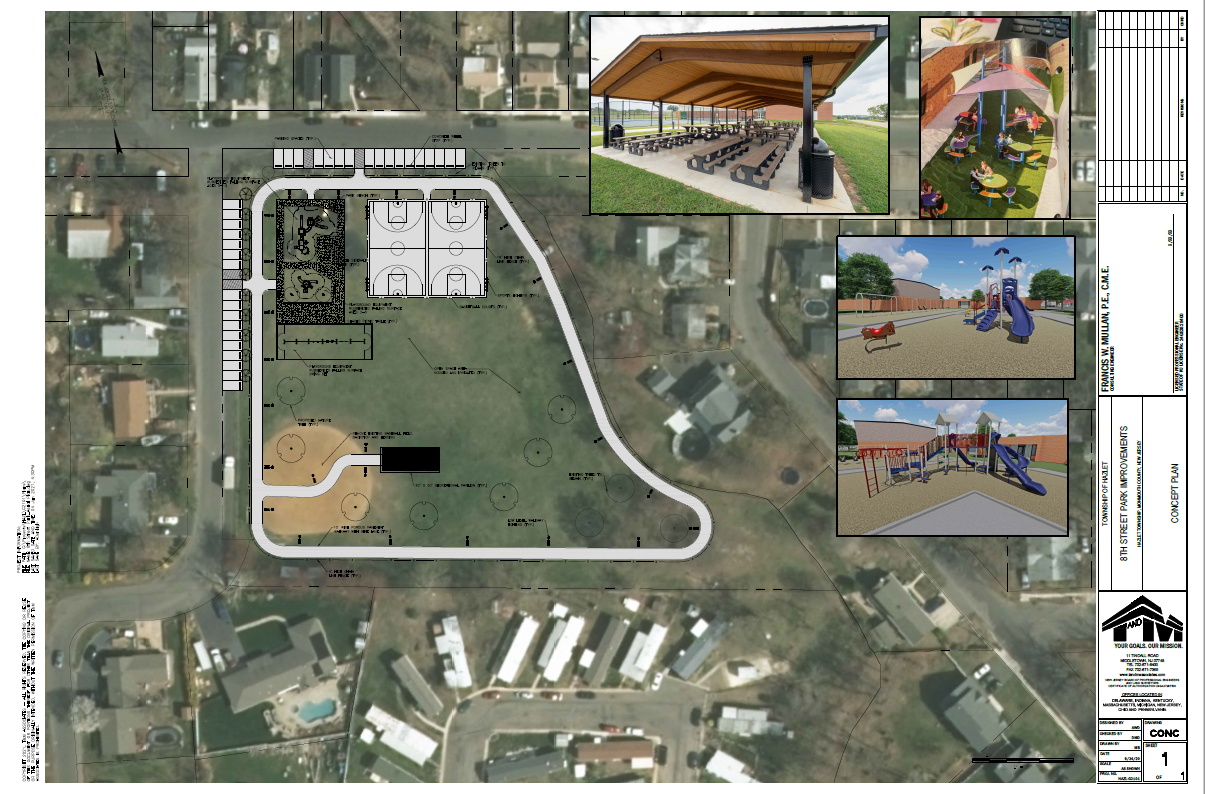 8th Street Park Concept Plan  You can download or enlarge this image.

Dear Residents of the West Keansburg section of Hazlet Township,

Hazlet Township is pleased to announce that there is now a plan in place to make substantial improvements to 8th Street Park, located at the corner of 8th Street & Brown Avenue. The Township recognizes that this park is outdated and underutilized in a section of town that does not have other recreational spaces for residents. The entire park is located within a 100-year flood zone. Maintaining this area as open space is beneficial for floodwater storage as well as reducing risks to life and property during flood events in this section of town.

The vision for this proposed project has been shaped by input from the community and will include ADA-compliant playground equipment, basketball courts, shaded picnic tables, a pavilion for activities such as group classes and music performances, an open field for sports and events and walking/jogging track along the periphery of the park. Safety improvements will be included such as updated lighting, a security system and a reconfigured safer parking area. (See the plan on the flip side of this page.)

The Hazlet Recreation Department cordially invites you, and your family, friends and neighbors to our first outdoor concert at 8th Street Park on Thursday, July 8th. The new Hazlet Pops community band will play a Broadway-themed program with over 50 musicians. The band is under the direction Raymond Lahaye, the leader of the Raritan High School Marching Band. The music starts at 7 pm. After the concert we will show the film Mamma Mia! on the big screen under the stars. Please bring a chair or blanket to watch. The Hazlet Pops will be playing every Thursday night around town for the month of July. For a full list of events, go to www.HazletTwp.org/Recreation.

As a West Keansburg native myself, I am happy to see improvements at the 8th Street Park and I am excited to bring more Recreation Dept. events to this side of the town.

Please feel free to reach out to the Recreation Office at 732-217-8648 or via email if you have any questions.